Story of a Train Wreck Case 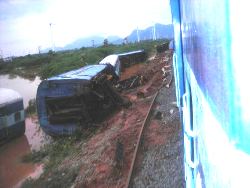 Martha was on the train going to pick up her young son from his grandparents home in New Mexico.  It was night time and very dark outside.  The inside of the train compartment was brightly lit.  Martha could hear the clack of the wheels on the rails.  A storm was coming as her train crossed over a railroad bridge.  The rain was pounding against the windows and she could not see outside in the dark.  She could hear the wind howling outside the windows. Suddenly the engineer slammed on the brakes and she heard the high squeal of the brakes against the steel rails.

Then the train lurched off the tracks,  crashed on its side and came to a stop in the dark.   Martha was thrown forward inside the train cabin, colliding with the forward wall of the cabin as the train came to a sudden halt.  She broke many bones in her body and ended up in a full body cast.

After speaking with her and agreeing to represent her, I filed a lawsuit in Federal court in Los Angeles.  As we proceeded, it became clear that the insurance company representing the railroad was not going to pay the full reasonable value of her claim.  We then went to mediation in order to try to settle the case.  After a full day of mediation, they still were not willing to offer an amount that was reasonable for her case.

I then had to figure out what to do in order to get a settlement that was reasonable for my client.  After some investigation, I found two gentlemen who were on the train who had a picture that would help.  After speaking with them, I was able to get them to send me the picture.  This picture showed that there was severe erosion where the bridge had collapsed and the railroad had never done the proper maintenance to prevent erosion.  This showed negligence on the part of the railroad.

After going into mediation again and presenting this piece of evidence, we were then able to settle the case for a full reasonable amount, which ended up being in the high six-figure range. My client was able to recover from her injuries and was compensated for the accident she was a victim of as a result of negligence on the part of the railroad.

I was very happy to help Martha get the compensation she deserved and make her life easier after such a horrific accident.

If you have been in an accident and have questions about what to do next, please give us a call at 949-496-7000.  The first call is always free and we will let you know what your options are.